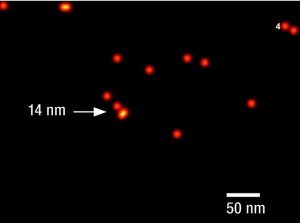 "Optically isolated" means that at a given point in time, only a single particle/molecule within a region of a size determined by conventional optical resolution (typically approx. 200-250 nm diameter is being registered.  This is possible when molecules within such a region all carry different spectral markers (e.g. different colors or other usable differences in the light emission of different particles).

SPDM is a localization microscopy that achieves an effective optical resolution several times better than the conventional optical resolution, represented by the half-width of the main maximum of the effective point image function.  By applying suitable laser optical precision processes, position and distances can be measured with nanometer accuracy between targets with different spectral signatures.